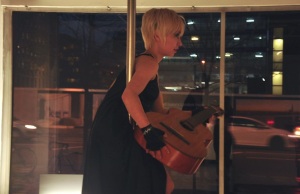 I recently had the opportunity to show some work in development at The Shag. The performance took place in the CASS space opposite Whitechapel Gallery. I was placed in the window of this exhibition space which gave a dual perspective as audience became passers by on the street as well as people attending The Shag. For the duration of the event, to no music, I danced, played smoke on the water on a one string guitar, read, texted, wrote notes and chatted to people. All on the pole. Multi tasking if you will. 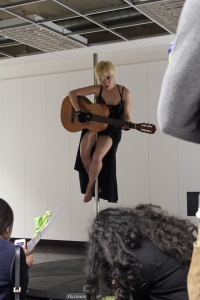 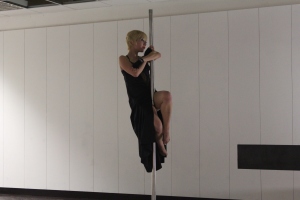 It was incredibly interesting to see how people responded in the setting of a white cube gallery. Before I began I watched one art viewer look at the pole alone as if it was a sculpture, hand on chin, thinking face in full flow, hilarious!

Once i actually began, many people would look at the items around the pole but did not want to look at me. Speaking to (very female) group of Shag attendees afterwards, the feedback was that they wanted to watch but felt like they shouldn’t. The connotations of a woman on a pole being that she must be somehow objectified in a manner that degrades her more than other live art and performance? Despite the other activities (book reading etc) performed on the pole, it was still uncomfortable for some. Perhaps they felt it wasn’t ‘high’ art. I would flit between balletic dance and classic pole moves. People would start watching when i was dancing balletically. They would stop when i started doing the spins, inverts and headstands. 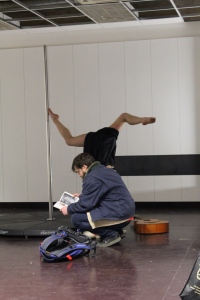 I want to reclaim my sexuality as a woman. It is not something that should cause averted gazes. I felt the sense of shaming that came with that.

Around the corner another performer, a man, performed a semi drag piece about the way women are treated in the media, and by men, in a way that is damaging. It was easier for people to watch him. I felt slightly deflated that people found it easier to engage with a man talking about what I feel affects my daily life than it was for them to look me, a woman, in the eyes as I addressed the same thing. However i do not blame men or women specifically. Lets do away with blame. I am only interested in continuing to put myself, a woman, performing ‘woman’, a thinker, a feeler, who should be able to embrace and enjoy my whole self, sexual and intellectual, nobodies fool, without shame, assumption, degradation or stigmatisation.

My body is not the perfect image of beauty, i am not in my early twenties. I do not have a partner. I feel both ‘male’ and ‘female’, i struggle to relate to popular images of femininity and yet i use them in my work. Interestingly in past performances such as ‘Every Time We Say Goodbye’ which is highly seductive, the audiences response was far warmer. She was softer, more vulnerable. Or so it seemed.

In this piece and in Her Lady’s Pleasure, there has been a notable audience divide. I must admit that it is primarily women who ‘get’ these pieces, and who want to discuss them with me. However Her Lady’s Pleasure was a collaborative piece with temp0rary, two men, who were completely on the same page as me and who i could not have felt more comfortable and confidant with.

I do not have the answers yet, just more questions, but i’m on to something! The more people want to look away the more i want to continue. It’s the grit in my oyster. 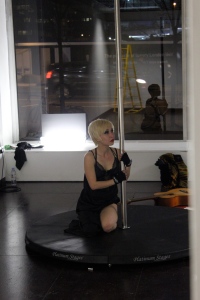 2 thoughts on “Smoke on the water”