Last year i was commissioned to make a new work by Companis for Rude Food Fiesta. The outcome of this was two new collaborations, This One’s For You, an intimate one to one that was performed for 8 lucky golden ticket winners (cameras were not allowed in this performance so there is no footage available) and a very special improvised collaboration with sound artist Sam Underwood that was for a larger audience.

This One’s For You was a performance with Charity Shop DJ who selected a number of vinyls for each ticket winner to choose from, and presented it to them on a menu. Music to choose from included ‘Rabbit Rabbit’ by Chas and Dave, sections from Puccinis ‘Tosca’, ‘Mister Entertainment’ by Bruce Forsythe, and more. Each ticket winner had also pre selected a meal from their choice of food stall at the event which was brought to them to eat during the performance. I then performed a pole dance for them, not your typical pole dance may I add. The lady who chose Tosca was moved to tears. Rabbit Rabbit induced whoops, clapping and laughs. Every performance different and especially for them.

The performance with Sam Underwood was a revelation!!! I have often done one to ones with audience members. This was different in that it was a one to one with the artists I was collaborating with. Sam had built a dual pipe and mouthpiece system that attached to his tuba so we could both play it at the same time. I ‘sang’ into my mouthpiece which Sam would hand to me when i gestured for it and he ‘subbed’. During the performance i was also on the pole so as we continued the sound became progressively altered by my physical state from the effort of dancing on the pole.

I cannot yet express in words how electric, almost meditative, that this experience was for both me and Sam and also for the audience. This work will be developed as we both loved it so much. 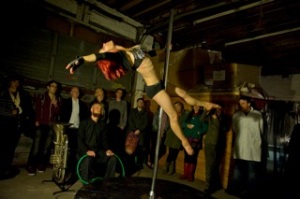 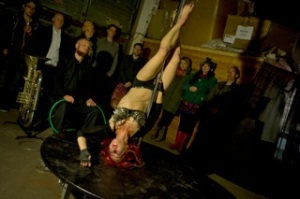